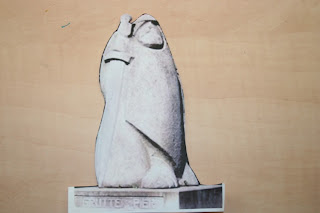 This the theme for the page for Bente .
Bente her theme is a fairy taile ore a legend from your country ore around you home town

Statue of Grutte Pier in his hometown of Kimswerd
Pier Gerlofs Donia of Kimswerd (1480? - October 28, 1520) was a Frisian pirate and freedom fighter. He is most well known by his Frisian nickname "Grutte Pier" (in the old Frisian spelling "Greate Pier"), or by his Dutch aliases of "Grote Pier" and "Lange Pier". These nicknames all refer to his legendary size and strength. His life is for the most part shrouded in legends, but there is no doubt that he really existed.
He was a farmer in the West of Friesland at the beginning of the sixteenth century in the village of Kimswerd near the city of Harlingen. His village was plundered by a band of mercenaries in 1515 during a civil war between Schieringers and Vetkopers, the latter in favour of the Burgundian/Habsburg rule over the Low Countries, the others against. During the sacking of Kimswerd Pier's wife, Rintze Syrtsema, was allegedly raped and killed. For this reason Pier started a guerrilla war against the Burgundian party and allied himself with Charles of Egmond, Duke of Gelre (1492-1538) the foremost opponent of the Burgundian Duke Philip the Handsome (1494-1506) and after him his son Charles V (1515 - 1555).
Pier's armed band, known as the Arumer Zwarte Hoop (Arumer Black Heap, as in group/mass of), was mainly active against the Dutch and the Burgundians at sea where he captured many English and Dutch ships. In the biggest battle of his career, in 1515, he captured 28 Dutch ships, which earned him the nickname: the "Cross of the Dutchmen". He bestowed the title "King of the Frisians" on himself, though. In 1517 he landed an army in the Dutch province of Holland and sacked the towns of Medemblik and Alkmaar.
According to legend, Pier forced his captives to repeat a shibboleth to distinguish Frisians from Dutch and Low Germans:
Bûter, brea en griene tsiis: wa't dat net sizze ken, is gjin oprjochte Frys.
(Butter, rye-bread, and young cheese: whoever cannot say that is not a true Frisian.)
Despite his successes Pier could not turn the Burgundian/Habsburg tide and he retired disillusioned in 1519. He died peacefully in bed in the Frisian town of Sneek in the year 1520 on October 28.
After his death Pier grew into a hero of Frisian folklore and tales abound which relate of his superhuman strength. A great sword which quite possibly belonged to Pier is kept at the Frisian museum in Leeuwarden. It measures 2.12 meters in length and weighs over 6 kilograms. To have wielded such a weapon he must have been a man of unusual stature indeed.
In his hometown of Kimswerd a statue reminds people of the village's hero. The line of text on the foot of the statue simply reads "Grutte Pier
And now I have to make a page of this story
I hope it works
Geplaatst door Emmy op 6:15 p.m. 6 opmerkingen: 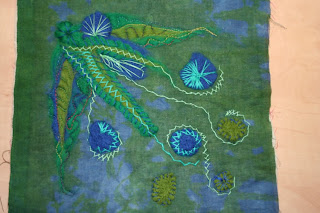 This is the cover of a Fabric Art Journal swap .
The theme is green and blue , there are 10 ladies in this swap it is on yahoo
The cover was the first step to take ,I took the colors of the theme .
The back ground fabric I deyed a little time ago but it is perfect for the theme
I jused merino wol and felted it on the embellisher , I started FME but later I got into the hand embriodry
Geplaatst door Emmy op 9:45 p.m. 7 opmerkingen:

eye of the soul 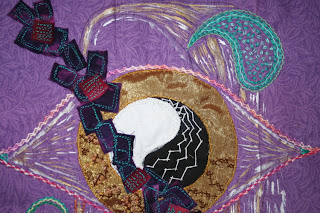 The proces is going on and I did some thing diverent ,,I never used paint in a quilt
but there must be a first time for everything ,,,
I think the background for more embriodery is good now
I used paint from dreamline I follow a workshop there ,
they sell wonderful paint for fabrick
Please feel free to comment it is my first time I use paint so I like some comment I can use
Geplaatst door Emmy op 11:18 a.m. 9 opmerkingen: 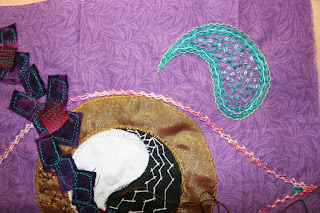 Some embriodery is done. I like to let you see the proces of this page .
Thid page wil take some time ,I wil adde more embriodery and i think some beading aswel. 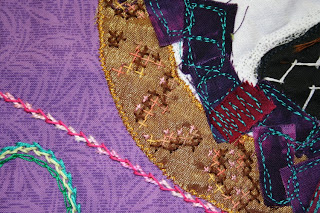 I added some embriodery on the eye .
I try to make the eye more lively
Dont now if it wil work but i have to try
Geplaatst door Emmy op 2:18 p.m. 5 opmerkingen:

page for kim and kitty 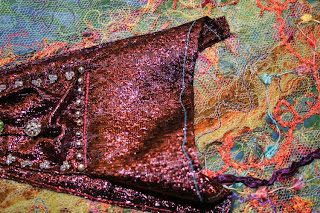 this page is for kitty it is the backside
a little pocket for some info
It is not finished yet more beading and embriodery .
The page for Kim is the next picture
Here theme is the eye of the soul
when i was thinking about that I found a
qoute ,,,,,,,,,,
,,Imagination is the eye of the soul ,,
and that got me started 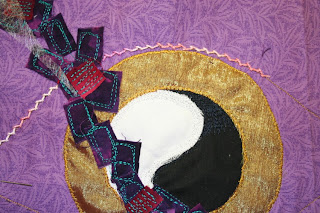 So I wil embrioder and maybe
this wil give me more ideas
Geplaatst door Emmy op 8:48 p.m. 4 opmerkingen: 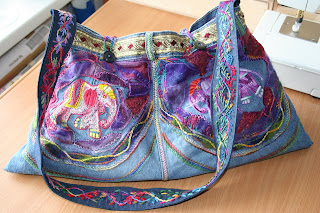 When I started on the internet and a blog

this is the bag I made it is made from an old jeans .

Sharon B did this challenge and now she hase an other challenge.

On 2 januari it wil start and every week Sharon wil explore a stitch .

There are over 100 stitchers that are going to participate .

I think this wil be great . 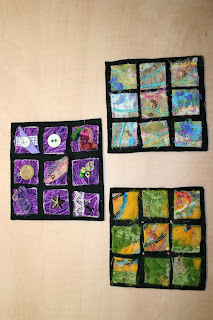 This is new ,I started whit the charmes and Arlee opend a new group on Flickr 1 inch squared

I made little block,s 9, 1 inch fiber pieces ,I put them on black felt , 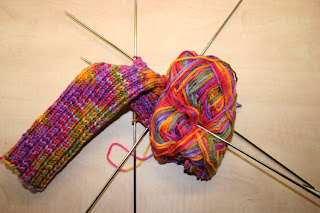 This is an old habit knitting ,I made so many Hats, soks,jumpers, and all other things ,

and now I am knitting again for my granddauther Emily .
I hope she likes it
Geplaatst door Emmy op 8:06 p.m. 1 opmerking: 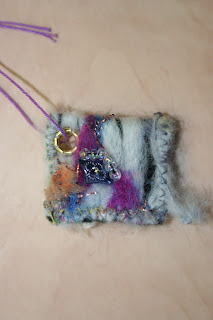 A new challenge on Flickr Fabric art charm bracelet swap,
I have to make 15 fabrick charmes and 14 other ladies do the same ,then we send it to Ruthrea and she wil make a bracelet for all of us .

I made 15 charmes , black felt whit wol felted on the embellisher
than I added some beads and made a eyelet in them .
there almost the same

On the front and the backside I have made beads ,the charme is 1 1/2 - 1 1/2 inch
Ruthrea will submit the charm bracelet to quilting arts magazine / cloth paper sciorrs publactions: www.quiltingartsllc.com/

I hope she gets it done it is a wonderful idea . 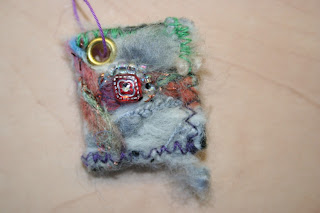 this is the backside of the page for Laura Lee ,I wanted to make a sort of little bag to put a little book in .for the quote and some info . 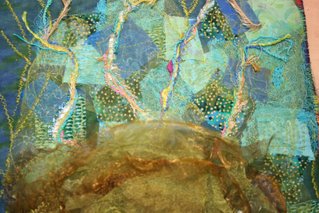 so from layers of organza worked on whit the embellisher i made a sort of pigeon hole
and I must say I like it ...... 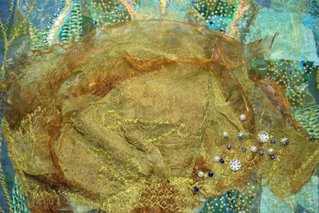 I added some beads and made a little book 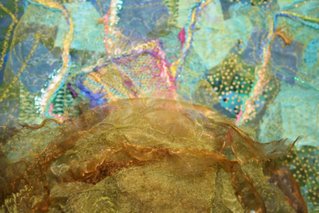 The last picture is from the finished page for Arlee 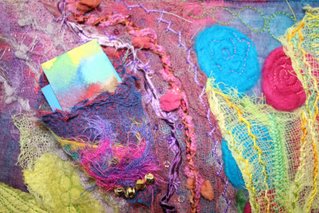 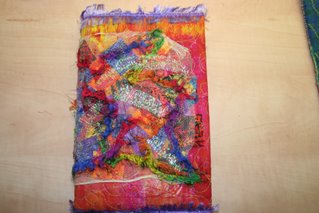 The book covers for my journals from the past are going very well I finished an other cover
And don,t they look great ???? 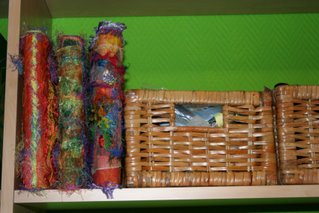 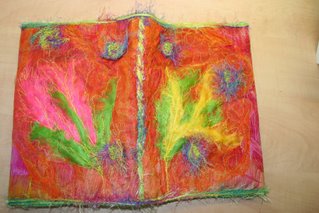 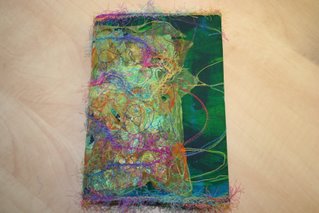 Book cover one closed and one open .the bookcover are made for my journals .
the journals have a black cover and I made a fabric cover
handdeyed fabric the green one :snippits of fantasie fiber and angelina layerd whit organza ,
FME and I burnt a little of the organza .
The orange one : feathers and on top organza ..
Geplaatst door Emmy op 11:54 a.m. 11 opmerkingen: 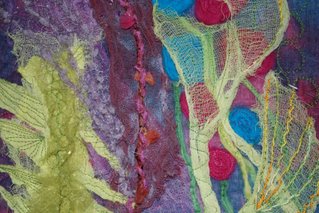 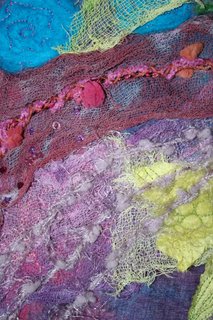 I have made some pages now for the art journal swap, Anthology, but they are all front sides and I have to make a backside to ,when that is ready i can send them out .
I started on Arlee ,s page ,
hand deyed fabric for the background and some mull I deyed to On the first photo you can see that i made some flowers on top of the flowers are some other flower I wil embrioder this ones

the idea was to create dept in the page ,I dont now if it wil work but i try .
so on to the working place to add more embriodery and beading .
Geplaatst door Emmy op 5:37 p.m. 12 opmerkingen: 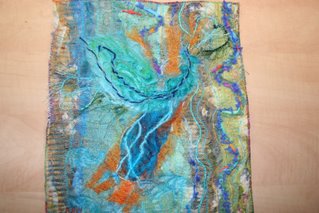 Wel Laura Lee your Page is done now ,The Backgroud is Handeyed fabric ,layers of arganza and tule on top ,this is FME end then whit a heat gun a little burnt so you can see the fabric
Than a added some fantasie fibers ,on the embellisher I made with merine wol and organza
the (figures ) and I FME them on top .
Geplaatst door Emmy op 5:58 p.m. 8 opmerkingen:

Emmy
May you have warm words on a cold evening, a full moon on a dark night,and the road down hill all the way to your door. 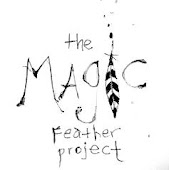 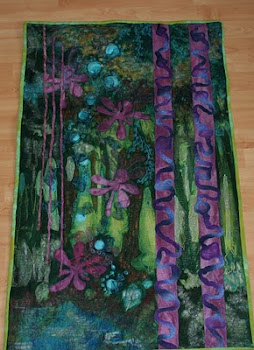 My first quilt made and sold 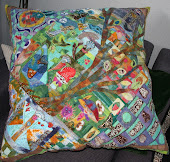 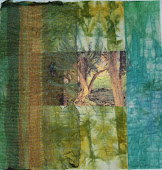 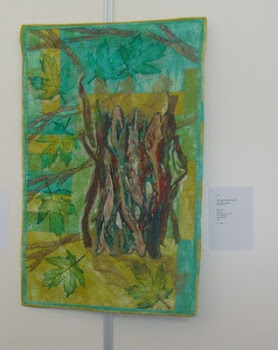 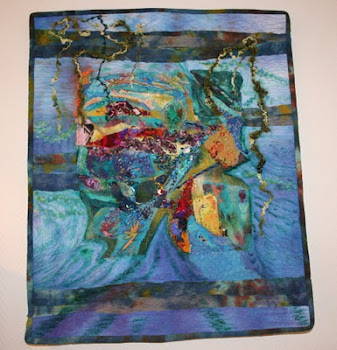